I first served this salad at a spring lunch we held recently, which started out as a few friends for a casual lunch, and escalated to around 25 adults plus 5 kids.

Although I thought I'd made loads of food (my motto is never knowingly undercatered), I realised around half past 3 that we were needed more filling food. I'd made loads (and I mean LOADS)  of yummy hummus, a carrot dip, a butternut squash, chicpea and beetroot salad, aubergine with miso dressing, a huge dish of gigante baked beans, our friend had brought along her special cheese pie and there was a BBQ planned for the not-veggies, but for some reason I'd gone light on the bread I'd purchased (not making THAT mistake again) and everything else was dissappearing quickly. Really really quickly.  I'd planned to get everyone involved in makeing mushroom gyoza, but it was too chaotic and we'd all had wine.

So I had a little panic.

And a little rummage in the cupboard and freezer.... and I had quinoa and frozen peas, and so this salad was born.

And it is DELICIOUS!

I added feta at the party- which went down really well, but this salad is just as delicious without.

Have you ever had an 'ERMAGAD' there isn't enough food moment when catering?

*For the record- there was enough food in the end- but I'm never going to forget the extra bread again. 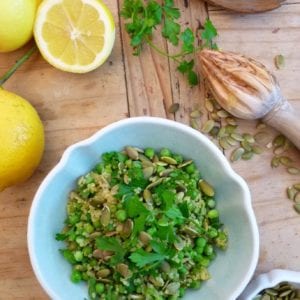 I rinse quinoa by putting it in the pot I intend to serve it in, swishing it with water, then tip out as much water as I can without tipping the quinoa down the sink- then repeating a few times.
The last rinse water stays in the pot to cook the quinoa with.