I've been a bit offish since getting back from Australia. A bad case of the flu, work commitments and the never ending grim news about a certain evil Wotsit and grey wintery weather. I wondered if I would ever get my mojo back.

Fortunately, the flu lifted and so did my mood. I managed to get to the gym &  I also went to the supermarket and picked up some new ingredients, including a sachet of dried soya mince.

Now, you'd think that being a vegetarian since I was 16 and a vegan for the past year that I would have tried this, but I think I was scarred by trying to cook it badly when I was a teen. The thing is, it had a pretty new packet, and I popped in the shopping trolley in the spirit of experimentation.

Firstly I tried making the mince up as part of a taco feast. I thought that if I had lots of other bits and bobs to prop up the meal then if the mince didn't taste too delicious, it wouldn't ruin the meal. So I cooked it up with some onions and spices..

And it was delicious!  Even the Gardener loved it!

Not only is it yum, it's easy to make. You just add hot water to re-hydrate the dried soya mince then cook it like - well- I imagine you cook mince. I don't actually know this because I can honestly say, I don't think I have cooked mince in my entire adult life.

To create the Gourmet Vegan Bolognese Sauce requires a bit of extra love:

I can tell you, that despite the soya mince being easy to cook, it does need a hella lot of seasoning, and a bit of a help with texture.

To add in an extra layer of flavour and create a more delicious, unctuous mouth feel, I peeled an aubergine and diced it really finely before adding it to cook in with the onion and garlic which worked a treat.  There is a rather long ingredient list, which helps create the other flavour layers- but don't freak out, they just get dumped in - and I imagine you have most of them in your cupboards already.

I used this brand, which worked really well for me,

but use whichever soya mince you find. 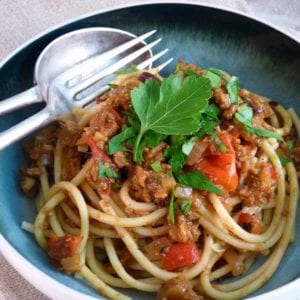 This sauce is going to be brilliant as a go-to meat free mince sauce. Lasagne, Shepherds Pie...you name it... its yum! Even The Gardener says so!