It's been a busy start to the summer. First we spent a week in Sardinia, where we ate ALL the pasta and spent every day swimming.  I promise you, there is a recipe or two that I need to share with you from our time in Sardinia however, we came back to  BBQ & outdoor cooking season and a I came up with a recipe I just HAVE to share!

How it came about was...

We came back from our holiday with a BANG!  Our lovely friends from Sacramento, California were visiting, so we decided to host a BBQ/Garden Party/Mini Festival in our garden in their honour. We like to throw just one big party a year, usually in late summer to make sure the weather is good, however our American friends had heard of our legendary garden parties & we just had to show them how to party UK Styleeeee...

We contribute the garden and atmosphere and our lovely (musical) friends come with all the DJ & light stuff you could imagine & take it in turns to entertain everyone.  The back part of our garden becomes a mini-field where everyone camps out, and we dance the night away to some awesome grooves.

To add to the festival feeling, we have bunting (obvs- this is England!), fairy lights and cutesy touches like a 'games' area, bubble machine & a dress ups/make up stand. (Don't worry- we also drink Prosecco Slushies , beer & wine too)

The other main event is the BBQ...

Over the years I have perfected the Veggie BBQ and have made it & all the sides into a fairly easy (all vegan!) menu. The sides tend to be a zingy coleslaw, a massive potato salad & big green salad.

Add to that a massive pot of Lentil hummus and some pastries to pop in the oven for the set up crew (they get HUNGRY!)  and the final touch is some veggie burgers.

Oh yes. Those Vegan burgers, every year I use a tried and true recipe that works, but is a bit of a pest to cook on the BBQ grill.  This year however, was different,  this year I got all experimental with them & used some slightly different techniques. It was a spin on a few other recipes that I'd played with before, however this time I used cooked beetroot. Then added kidney beans and lentils along with the usual spices.

I thought I was SO clever.

Problem was, the mix was a bit sloppy. And it was nearly midnight. And I needed to get these patties made...So to firm up the recipe, I chucked a whole lot of things at it. Soya Mince.. which I added in dry, and not only absorbed lots of the liquid (Phew!) but created a pleasing extra bit of texture. Then to help bind, groung linseed (flax seed) mixed in a little water to form gel. And finally, when forming the burgers, I used sesame seeds to coat the burgers. These not only taste great when grilled, but they prevent the burgers from sticking. Result!

The burgers were then chilled in the fridge overnight (very important step!) which made them firm enough to handle. Once on the BBQ grill they were surprisingly easy to manipulate. The flax/linseed has a wonderful property that really binds ingredients together and to my mind, works better than eggs in this type of cooking.

Even better? Everyone loved them. And asked me for the recipe. And so I dedicate this post to all the party people who asked for the recipe. Let me know if you make it...and if you improve on it! 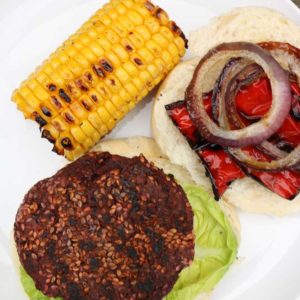