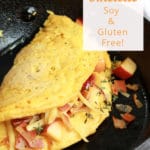 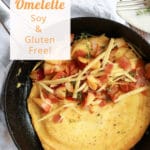 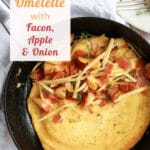 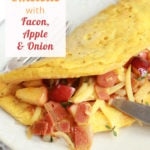 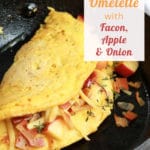 I am a big fan of recreating traditional dishes with a vegan twist. Omelettes were the first dish I learnt to make as a seven-year-old, as they are so tasty, simple and easy. Then I realised the vegan egg version was super simple, and even better could be pimped up. So I’ve created this Vegan Omelette with Smoked ‘Bacon’, Apple & Thyme. The smokiness of the ‘bacon’ (or ‘facon’) contrasts so well with the sweetness of the apple and is lifted by the thyme. We then add some vegan cheese in for an extra layer of cheesy goodness! Heads up! This post contains affiliate links which are always indicated, but we only endorse brands and products we really love. We'll earn a little commission from qualifying purchases. This keeps us creating vegelicious content 🙂 First, the vegan omelette. Traditionally made out of egg, but the vegan version is made from chickpea flour (affiliate link), also known as gram flour or besan. The thickness of gram flour when mixed with water gives that nice solid omelette texture. You can also use yellow pea flour if you can’t get hold of gram flour. There is a vegan substitute for eggs in any dish you want to make; check out our post on How To Vegan Egg for what use. The omelette just takes a few extra ingredients to give it the flavour, colour and texture you need. Tumeric will give it that yellow colour, and the Dijon mustard and nutritional yeast will help to give your vegan omelette that eggy taste. This vegan omelette is gluten free, soy free and nut free as well as being plant based!

You can fill your omelette with anything you like, but I’ve found this one to be the most satisfying and delicious! Smoked ‘bacon’ or facon, apple and thyme are a classic combination. Then add vegan cheese, and it’s a winner. There are many great versions of vegan bacon now you can pick up from supermarkets and healthfood shops; some great brands are Plant Pioneers (Sainsbury's own brand) and This Isn’t Bacon. For the vegan and dairy-free cheese, there are lots of options available in healthfood shops and even the supermarkets. You can add the vegan cheese once served or melt on the omelette on the pan (depending on whether you use a melty cheese or a harder cheese).  The Applewood Vegan Cheese (affiliate link) is delicious, and would add even more smokiness to this! Any other vegan cheese will do; we love Follow Your Heart smoked gouda. A great vegan cream cheese would also work very well in this dish. There are lots of artisan vegan cheeses you can buy in the UK which are INCREDIBLE; we reviewed these vegan cheeses on our blog if you need some help choosing. You can add extra vegetables to this Vegan Omelette with Smoked ‘Bacon’, Apple, Thyme and Vegan Cheese. You can wilt in some spinach, put fresh salad on the side and add your avocado on toast! It’s also totally acceptable as an amazing plant based breakfast, lunch or dinner! No restrictions at The Vegan Larder 🙂 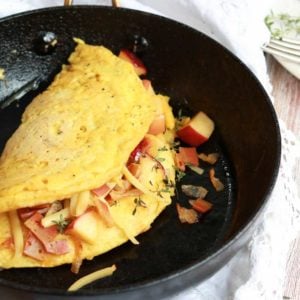 This Vegan Omelette with Smoked ‘Bacon’, Apple, Thyme and Vegan Cheese is the most incredible substitute for your eggy breakfast. The smokiness of the ‘bacon’ (or ‘facon’) contrasts so well with the sweetness of the apple and is lifted by the thyme. The vegan cheese gives an extra tang to it, and extra moisture. Also suitable as lunch and dinner!
Prevent your screen from going dark
5 from 2 votes
Print Pin Rate
Course: Breakfast, brunch, lunch
Cuisine: American, breakfast, british
Keyword: egg, omelette, plant based egg, vegan egg, vegan omelette
Prep Time: 15 minutes
Cook Time: 10 minutes
Servings: 2
Calories: 513kcal
Author: Vanessa Sturman