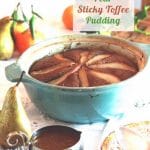 this recipe
Oh yes, pudding time again! At Christmas I love coming up with indulgent desserts as alternatives to the traditional Christmas pudding. Not knocking a Christmas pud, but I am loving this warming, spiced and delicious Vegan Ginger and Pear Sticky Toffee Pudding. Not your usual, I have festive-ed it up (is that a word? It is now!) with the Christmas spice ginger, and added pears for that winter feel and to add extra texture to the dish. Incredible with vegan ice-cream or vegan cream after your delicious roast dinner!

This is a good old British pudding, and for good reason. It reminds us of our childhood and the sticky toffee sauce is so sweet and fun. It has been great creating the vegan version, and of course, making it sooooo much better.

So the cake bit; this has extra sweetness and moisture from the dates, and I’ve added lots of ginger spice which contrasts so nicely. It reminds you of a gingerbread taste, which is filled with memories at Christmas. The twist on this sticky toffee pudding is the pears, and the beautiful fanned arrangement you can do with them makes them a showstopper for any dinner party dessert. Pears are very in season in winter, and are perfect for dessert; sweet and they hold their shape really well. They are actually very easy to cut into that fan shape (there are some photos below that show you how I did this), and they look so pretty when arranged like that. Of course you could use apples instead if that’s what you have available. You can use margarine, or a vegan butter, for the cake mix, but Louise has introduced me to de-odourised coconut oil. As the name suggests, it doesn’t smell of coconut. This is so helpful as coconut oil is great to cook with, but often has a strong taste. We love coconut, but don’t want the taste in EVERY dessert! Many vegan butters and margarines still have palm oil in, but there are a few, like the Naturli brand, that don’t. Normal coconut oil is still also fine to use if that’s what you have. Lastly, the sticky toffee sauce. So this is now mine and Louise’s go to sauce! We know other recipes use soya cream and margarine etc, but this one just works, and it is only two ingredients; coconut milk from a tin, and brown sugar. Any sugar will work but I prefer to use coconut palm sugar. You just boil up the two ingredients and let them thicken. This can take a while (10-15 minutes) and I always seem to have that little freak out of “Ahhhhh, it’s not going to thicken!” but it always does. You can double the toffee sauce ingredients for extra pouring fun, and it keeps in the fridge in a jar for at least a week! Brilliant for a drizzle on any other dessert; if using again later (if there’s any left!) heat it up before using so it goes more runny! This Vegan Ginger and Pear Sticky Toffee Pudding is best served with vegan ice-cream or vegan cream, drizzled in extra toffee sauce and a big dollop of love! 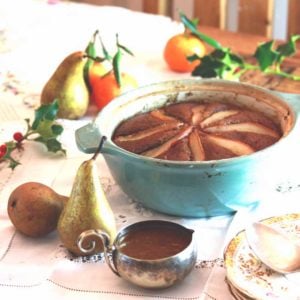 Vanessa Sturman
This warming, spiced and delicious Vegan Ginger and Pear Sticky Toffee Pudding is delectable. Not your usual, it has been festive-ed it up (is that a word? It is now!) with spicy ginger, and added pears for that winter feel. Incredible with vegan ice-cream or vegan cream!
No ratings yet
Print Recipe Pin Recipe
Prep Time 20 mins
Cook Time 35 mins
Course birthday cake, Dessert, pudding, sweet
Cuisine American, british
Servings 8
Calories 353 kcal

For the pudding mix

For the Toffee Sauce (double the ingredients for extra moisture and sauce!)

For the Pudding Mix

For the Toffee Sauce