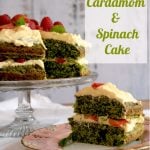 Yes, that's right, it's ONE year since we started to send out our Vegan Larder Subscription boxes. We can't quite believe how quickly the time has flown and how much we have learnt on the way. The past year has been quite epic!  We've tried and tested all kinds of recipes, created a vegan wedding menu for a lovely venue, held a talk at The Hospital Club, hung out at loads of vegan events and were even nominated as 'Best Food Subscription Box by the Independant. All in one short year! But why on earth have we decided to make a cake with spinach to celebrate? Are we mad!? I mean, it's a GREEN cake!!

We're not mad. Stick with us.. The inspiration for this cake came from one of our best ever recipes, Super Delicious Carrot Cake with Aquafaba

The carrot cake blog post has had a recent little face lift (go take a look) and when I was making it to photograph I remembered just how delicious it is & thought, well if this recipe is great, how can I use it as a building block for other equally delicious cakes?

One of the key's to its success is the carrot element. It adds a delicious moistness (ya- I hate that word too, but that's the word to use) I initially had thought to maybe try beetroot, or maybe even sweet potato to replicate that element. But then I started to think about our lovely green logo, and thought it would be nice to have a green cake. Which then led me to wonder  if carrot can taste delicious in a cake, maybe something green, like, I don't know spinach would work? And you know, I think we have all been missing out all these years because it turns out, that spinach is the perfect thing to add to a cake. Yes it's green. Which is a bit strange, but it tastes AMAZING. So there.

Now, one of the joys of carrot cake is the spicing. But I didn't want to use the same spices, because then it would be just carrot cake, but green. So instead I added cardamom  because I feel like it's quite a 'green' fresh flavour but it is also quite warm and comforting at the same time. Originally I thought it would work to infuse the pods in the spinach while cooking it, but that wasn't enough of a punch, so ended up grinding the pods in my mortar & pestle instead. By all means use pre-ground cardamom, I just didn't happen to have any! You could easily make this cake without icing or frosting, but as it's our birthday, I decided to make a lemon buttercream. We usually tend to avoid buttercream, mostly because vegan 'butter' tends to be made with palm oil (which we avoid), but this time we went all out & used my favourite 'Naturali' vegan butter, which is a) delicious and b) palm oil free.

Final disclaimer: I used frozen spinach. I keep some on hand for adding to soups & stews as a quick added extra bit of green. 230 grams of frozen spinach gave me 200g weight once it was thawed, cooked & squeezed out. If you want to use fresh spinach, you will need roughly ½ kilo of fresh for 200g.

Now. Back to the Birthday bit. I took this cake along to a friends birthday after blowing out our celebratory candle and the verdict was that it is utterly delicious.

So. I hope to make spinach cake as much a part of the cake scene as carrot cake is. Help me out. Spread the word!

P.S.--We have two AWESOME offers to celebrate being ONE!! 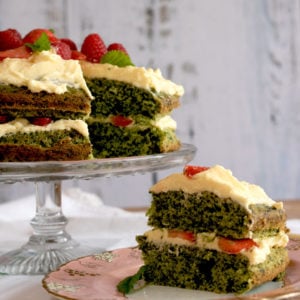 For the Lemon Buttercream

Keyword cake with aquafaba, vegan cake, vegan spinach cake
Tried this recipe and loved it? Follow and Mention @vegan_larder or comment and ⭐ below