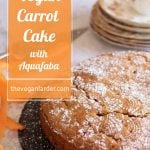 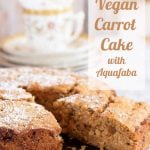 You might have noticed that I'm not much of  a baker. In fact, since I started this blog I have yet to write-up a single cake or dessert recipe. The thing is, neither The Gardener, nor I have much of a sweet tooth, so as much as I like pottering around in the kitchen, it almost always seems a waste to make cakes, biscuits or cookies as they just won't get eaten.

The one cake I do love however is a good, moist & spicy carrot cake. The sort with a moist & dense yet somehow fluffy crumb that works just as well on its own or can be jazzed up with a lemony icing. I'd been thinking about making one  for ages...but hadn't quite got my head around how I'd go about it.. But then I discovered a new thing: Aquafaba

I was recently intrigued by the new discovery in the vegan world that Aquafaba (a fancy word for the water that you drain off a tin of chickpeas) is a very good egg replacer. It turns out that the nifty chickpea leaches out proteins that are similar to egg white into the water it's cooked in. This gives the chickpea cooking water a slightly viscous texture, that has really similar properties to egg whites. It can be whipped into meringues, added as an egg replacer in cakes and used to bind crumbs to fried goods. There's a whole rabbit hole of wonders to discover with this completely natural wonder ingredient that I had previously just rinsed down the sink!  If you want to learn more, there is a wonderful Facebook group dedicated to experimenting with Aquafaba.. go take a look, there are some seriously talented & experimental bakers & cooks out there https://www.facebook.com/groups/VeganMeringue/

So obviously I was keen to try this new wonderous ingredient to see for myself if it really did work. I tried first with some meringues. I simply whipped the aquafaba in my new food processor until fluffy, this took around 10 mins,  but as they whipped, they became soft and airy, with the exact texture of whipped egg white. I then slowly added sugar until glossy, then plopped the meringue mixture onto a baking tray & baked at a very low heat. And they worked. No beany flavour, no weirdness. Just crunchy sweet meringue. Obviously I made about a zillion of these, far too many for us to eat, so I did what I should have thought of doing ages ago, I took them into work. And they were promptly eaten. Result.

Which made me think, maybe rather than bringing in the usual store bought cake into work for my birthday, I'd make the carrot cake I'd been wanting, but veganise it with Aquafaba to replace the eggs and see what my colleagues thought. The brilliant thing about carrot cake is that it's quite easy to make, most recipes call for a neutral oil instead of  butter, so the only real replacement ingredient is the egg.  So I was pretty confident I'd be able to pull it off. I decided to play it safe for my first real foray into vegan baking & use a Mary Berry recipe for a jumping off point (after all, her recipes are pretty much always going to be quite fail safe..... right??)   But I couldn't help myself, and deviated somewhat more from her recipe than originally intended, using only half the oil she specified, and adding some extra baking powder, plus also adding in some allspice as well as the traditional cinnamon and ginger, and subbing pumpkin seeds for her walnut pieces.

I also baked my cake in one large tin, not wanting to go the full cream cheese frosting in two layers faff. I instead mixed a light lemon icing to drizzle over the top in squiggles, that I think, whilst maybe not quite as festive as a layer cake, still looked elegant (well, sort of )  and despite a little sinking in the middle, tasted delicious.

Best of all, this cake had the thumbs up from all my work colleagues, and as it was so huge, kept very well in its tin over the weekend ready for a lucky few to snaffle the remaining slices for elevenses on Monday.

This small success has given me a little bit of a baking buzz. What else shall I make to test on my work guinea pigs, I mean, colleagues?? 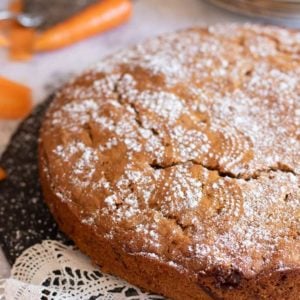 Vegan Carrot Cake made with Aquafaba

This cake keeps well for at least 5 days in an airtight container. Probably longer but it was gone before I could test it! Adapted from Mary Berry
Keyword aquafaba, cake with aquafaba, Carrot cake
Tried this recipe and loved it? Follow and Mention @vegan_larder or comment and ⭐ below