I adore this time of year, with everything starting to bud & bloom. Spring ushers in some of my all time favourite veggies in the market too. Ok, so you'll probably hear me say this EVERY season, but that's what's exciting about seasonal eating!  What's wonderful about this time of year is that every week or so a new veggie makes a seasonal appearance, & I get obsessed with that. Right now, Purple Sprouting Broccoli is my current obsession. Which is how I came up with this Early Spring side dish of Purple Sprouting Broccoli & Herby White Bean Gratin.

We were asked by Steenbergs (who make fabulous herb and spice mixes) to create a recipe with their Organic Herby Lemon Stuffing, as we're including it for our Vegan Larder Deluxe box subscribers to try this March!  Initially I had thought of a more traditional recipe, using the stuffing for a pepper or tomato, but as I wandered around the market near where I work, I just couldn't get excited about that idea. It just felt wrong to be trying to make a late summer vegetable work in a recipe in the very earliest of Spring. What I did find were oodles and oodles of wonderful, fresh looking purple Sprouting broccoli, just picked & looking glossy & gorgeous. So, instead of using the stuffing to 'stuff' something, I've used it as a yummy crunchy/crispy on the outside, soft & squidgy underneath 'gratin' topping to go with the gorgeous green & deep purple spears. The addition of some soft white beans (cannelini in this case) that have been cooked in garlic & wine as an under-layer adds to the overall creamy effect. This recipe is perfect as a side dish, maybe with a yummy nut roast, roasty potatoes & some gravy! Or with some vegan sausages & mash! 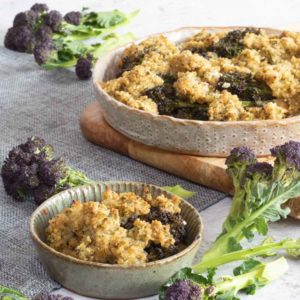 * Disclaimer: The Herby Stuffing was gifted to The Vegan Larder by Steenbergs to create this recipe.

I love to cook and share gorgeous vegan food! I'm also a photographer, recipe developer and gardener. Find out more over on my About Me page.

Everyone's talking about these recipes..