What on earth is a Vegan Power Bowl? Is it like the American Super Bowl but Vegan? Is it the source of all things green?  Is it a vegan power up?

Who knows? We don't and we named it! (We should probably have a word with our recipe naming department)

What we do know, is that it is full of wholesome and tasty ingredients, brought together with a banging sauce by our friend Mei, who makes delicious sauces inspired by her native Hong Kong and her travels around the world.

Of course, you could use almost any sauce in place of Mei's Dan Dan sauce. A black bean sauce, some katsu curry sauce or a peanut satay sauce would work well here too.  (Just make sure it is a yummy sauce!) The point of the power bowl is to create a base: we like to use a half/half mixture of long grain rice & quinoa. Then add lots of fresh green vegetables, some gorgeous mushrooms, and some nuts for crunch and added extra protein & flavour. The sauce is the - er-- secret-- to bringing the whole together to make it a tasty, easy meal.

Now, don't be scared about cooking the rice and quinoa mix. There's a trick to it that once you master, you will have forever. (It's the same method to create perfect fluffy rice. )

You could of course use a rice cooker or whatever for the same results. But what would be the fun in that?

Anyhoo.. here's the method & recipe for the whole Vegan Power Bowl: Feel free to change the mushrooms, add other greens, make it your own! It's endlessly versatile.

After all. Vegan's have Super Powers. 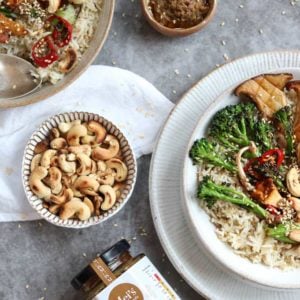 For the Rice & Quinoa

The great thing about this recipe is that you can customise it with all kinds of veggies. Red peppers, edamame, peas or beans would all be delicious too!