I forget how much I love fruit cake; as usually I'm obsessed with all things chocolate. But when my mum made a version of this Vegan Spiced Apple and Sultana Cake with a yummy Caramelised Topping I knew I had to share it with the blog. Apple and sultana are a classic pairing, and there are so many sweet spices that lift their flavours to another level.  Raw brown sugar is great for making caramelised toppings, so this cake is nicely finished off with browned caramelised sugar.

My Mum originally had an old version of this recipe which wasn't vegan. Mum is also now a vegan so she had a play around with the recipe and It came out completely delicious! What I love about this cake is that it’s so moist from the apples. The cake can also work with fruit like pears instead of apples, or another dried fruit instead of sultanas, like raisins or dried apricots. I decided to put in quite a bit of mixed spice and cinnamon, but that’s because I love them. Of course you can choose which spices you use; maybe you’d just like to use ginger and nutmeg, or cinnamon and cloves? They are all great with apple and sultanas, however mixed spice gives the best variety of flavours.

You can use wholemeal or regular self-raising flour in this cake. I much prefer wholemeal for this recipe as it gives a deeper taste to the cake, and you get more fibre. Any kind of sugar will work, however, for the topping some sort of brown sugar will work best.

What makes this vegan apple cake SO great? The topping is a big part of what makes this cake special. The brown sugar sprinkled on top caramelises in the heat, giving a sweet sticky top, which also looks very beautiful. No need for fancy icing with this easy to make cake!

This cake has been a real hit with my housemates, so looks like I’ll be making more! Enjoy on its own or with a some vegan ice-cream, yoghurt or cream. It also keeps pretty well for a few days in a container and isn't too sweet, so it's perfect to snack on for an indulgent coffee break. 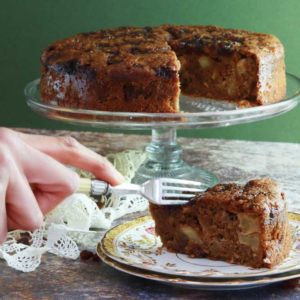