We think that this Parsnip and Apple soup with Parsnip Crisps has been one of the tastiest this winter we’ve had. And with this cold snap, we hope you'll think so too!

It’s made with roasted parsnips, apples and various spices and uses vegan single cream which just makes it so smooth and warming. This is contrasted so well with the parsnip crisps which we sprinkle on top which are so simple to make. (and are SUPER delicious too!)

There’s sometimes a danger with apples in soup that the soup turns out a bit like pureed baby food, so it needs to be paired with the right savoury ingredients, herbs and spices. Parsnips are a great healthy root vegetable with a distinctive sweet and earthy taste which goes brilliantly with apples. Both are seasonal in this cold weather, so are easy to get hold of and will be at their tastiest.

For most of my soups recipes I roast the vegetables first. This helps bring out their flavour and almost makes them caramelise a bit. This recipe has less apples than parsnips in it so the apples don’t overpower the taste; the apple in this soup is a bit more subtle but gives that edge of sweetness.

The spices compliment and bring out the flavour of the parsnips so well. I used nutmeg and cumin. Nutmeg is traditionally used for sweets, and cumin for savoury, and together they make a great combination. The secret ingredient in this soup is probably the Dijon mustard, which gives a fun and spicy kick, and just that small bit of sharpness. For the single cream, there are now lots of brands available in supermarkets and health food shops, made from plant foods like oats, soya or almonds. Don't worry about not using it all up, whatever you don’t use can go into the freezer for next time.

The parsnips crisps were a great hit. What I love most is that they are so simple. You just need a few parsnips, tiny bit of olive oil and some seasoning. A regular peeler will do to get yummy  thin strips, but if you have a fancy swivel peeler, then use that for some more fun shapes. The key is spreading them thinly on baking trays (a bit of overlap is fine as they shrink in the heat), and they come out wonderfully crispy. They will last for at least a week in an airtight container. Cooking takes all the moisture out of them which means they last longer!. You can make crisps with other root vegetables like sweet potato, beetroot or carrots - soon you’ll be topping all your soups with veg crisps! 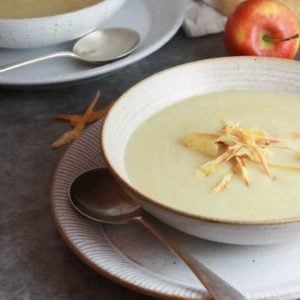 Vanessa Sturman
This Parsnip and Apple soup with Parsnip Crisps is one of tastiest of our winter soups. It’s made with roasted parsnips, apples and various spices. It uses vegan single cream which just makes it so smooth and warming. This is contrasted so well with the parsnip crisps, which are so simple to make from just a few ingredients.
5 from 1 vote
Print Recipe Pin Recipe
Prep Time 20 mins
Cook Time 1 hr 30 mins
Total Time 1 hr 50 mins
Course lunch, Soup, starter
Cuisine british, French, soup
Servings 6