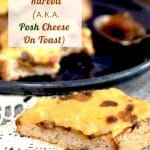 this recipe
It's that weird time between Christmas & New Year. We don't know what day it is, lunch is for dinner and we've eaten a mash up of chocolate & mince pies  for breakfast. We've eaten all the nut roasts & veggies but we still have left overs of weird bits of vegan cheese & oddments of wine or beer. This is where this brilliant recipe Vegan Welsh Rarebit comes in.  It's delicious, uses up odds & ends and can be eaten at any time of day.

Welsh Rarebit is essentially poshed up cheese on toast. Traditionally made with a roux (white sauce) made with beer, it is cozy & satisfying but also super simple to make (and eat!)

Importantly for this time of year, this Vegan version of Welsh Rarebit is also a great way to feed several people who for some reason are snacky, but don't want 'much to eat'. It can also be easily adjusted to what you have in the fridge. Add a layer of chutney like we have. Or use up extra tangy mustard. Substitute the beer for white wine, or leave it out & just use plant milk. Use up whatever left over bits of vegan cheese you have. Or if for some inexplicable reason you don't have any, just use loads of nutritional yeast. You'll still get that amazing comforting cheezy flavour! Yum. This Vegan Welsh Rarebit is  brilliant served up with some soup, or just to snack on after a bracing walk out in the cold. Or maybe pair it with some yummy tangy salad (this carrot salad is brilliant as an accompaniment at this time of year)