This luscious Roasted Tomato & Red Pepper soup was created in that odd period between Christmas & New Year. There were still left overs to eat, but neither of us could face them, needing something full of zingy bouncy flavour, yet to be soothing at the same time. For some reason we had a few of those long red peppers hanging around the fridge, plus I had some tomatoes stashed away in the freezer left over from our summer gluts, so a rich, tomatoey soup seemed like just the ticket.

Also, I was given a shiny new food processor which I was dying to use!

To create extra depth of flavour, I roasted the tomatoes (direct from frozen!) in a pan with plenty of thyme, garlic & some chilli. As these were frozen, they did give out an initially alarming amount of water, but then, I figured, I'm making soup, so actually its fine, and added a bit of red wine in & some stock powder to the mix. After 45 mins or so the tomatoes had sort of caramelised on top, and the juices had cooked down into a nice tomatoey stock.

Now, I understand most of you won't have tomatoes in your freezer, don't worry! This soup is just as easily made by roasting fresh tomatoes with loads of herbs & garlic, and some red wine, maybe for around 30 mins instead of 45, and later adding stock when whizzing up. You'll still have some concentrated tomato juices in with the red wine that will round out the flavours nicely.

The other key to this delicious soup is to char the peppers whole under a grill until their skins are blackened, then put them in a bowl with a cloth over so they steam a bit, which loosens the skin &  charred bits. Then peel the skins off to reveal the gloriously smoky flesh, discarding the seeds & stem, ready to blitz in with the tomatoes once they're done in roasting in the oven.

This soup comes out souper (sorry) creamy with no added butter or cream, the roasted garlic helps here I think, as does whizzing the whole roasted tomatoes, seeds and all.

Garnish as you like.. with herbs & crunchy breadcrumbs is nice.  It's also brilliant served with some crunchy on the outside, squidgy in the middle garlic bread. 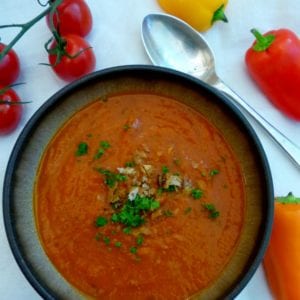