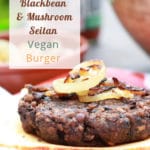 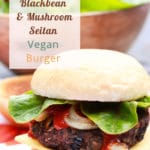 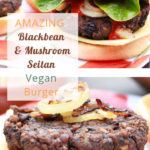 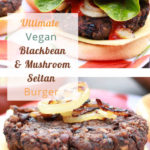 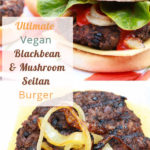 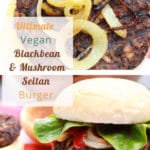 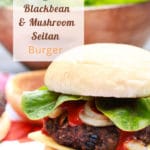 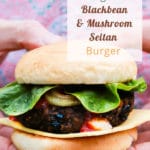 Everyone loves a good burger, which is why I've been on a mission to make the best vegan burgers around. After years of experimenting, I've created the Ultimate Vegan Blackbean & Mushroom Seitan Burger!! What makes it SO good? Well, it's still a vegan burger, but with a meaty twist. The black beans & mushrooms provide deep umami flavour & a great vegan bean texture, while the seitan adds a bounce and meaty style texture that really satisfies carnivores & vegans alike. It's the perfect combination of all things burger!

Some vegan burgers that you can get in shops have become a bit too scarily 'real' for my liking. And by 'real' I mean they really resemble those cheapo burgers that I remember eating when young. This was not the effect I was after at all when creating my Ultimate Vegan Burger!

I wanted to create a burger that still had all the good bits of a really good veggie burger, but with a more satisfying bite. I also wanted it to be able to withstand the grill or BBQ, and when heat applied, to get that all-important Maillard reaction which gives that deep caramelisation & extra flavour to grilled food! I've made other burgers in the past (Like my Amazing BBQ-able Bean Burgers) and they're all great, in fact, if you don't want to go down the seitan making route, or are celiac, I suggest you try those as a really tasty alternative to these.

But these Blackbean & Mushroom Seitan burgers... they're a whole new level of deliciousness! Not only that, each burger has a whopping 22g of protein!! Amazing! Don't be put off by the long list of ingredients. It's mostly seasonings, and they really do add an extra level of deliciousness to the finished burger. You can also play with the seasonings here. Add loads of garlic & chilli for a spicy burger. Or maybe go for a more Italian style flavouring with extra tomatoes & herbs. These burgers can take big flavours thrown at them, so don't be shy when adding them in!

The burgers have a few steps that might be unfamiliar: Here they are after mixing and resting for 45 minutes. The resting gives them time to develop the gluten strands (seitan). This creates their delicious meaty texture!

Then you form the burgers & oven bake them for half an hour. This means they're stable. You can then grill or BBQ them to finish them off.

Once they're out of the oven, you can freeze some for later, or let them rest for a bit before getting your BBQ or grill out for the perfect BBQ Vegan burger treat! Oh, and the recipe easily makes 12 burgers. So make them ahead, and after their initial baking, freeze the ones you don't use on some grease-proof paper to keep them separate. Then you can bring out the Ultimate Vegan Blackbean & Mushroom Seitan Burger ready to grill as soon as the sun shows! 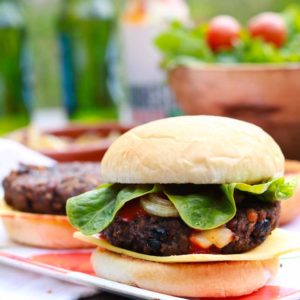