I love a dumpling- and always want to order them when I'm eating out at a Japanese restaurant..and I love Yum Cha.. ( aka Dim Sum) although have sadly not had it nearly enough since moving here from Aus.. and it's quite tricky to get vegetarian dumplings at Yum Cha.

Fortunately, I once lived with Manri- my lovely Japanese flatmate- and she taught me how easy it is to DIY your own gyoza dumplings, which allows you to experiment with your own fillings.

And so- recently, I experimented again... And these little beauties came into being.

Now- these ARE a bit of a fiddle to make- but I have to say I make a whole lot all at once- it's quite theraputic to stuff & fold, stuff & fold, stuff & fold. After a while you do start to get your folding technique sorted quite quickly. I then freeze the ones we don't use immediately. The frozen goyza aren't quite as delicious as freshly made gyoza but hey- quick dumplings for a speedy mid-week dinner? Maybe with some noodles or some miso soup and stir fry veggies to help out = Dinner WIN!

Now- I neglected to take pics of exactly how I folded the little parcels. But you essentially put a small teaspoon of the stuffing mix on one side of the gyoza wrapper, then slightly wet the edge with a bit of water, fold the other half over and sort of fold and press to make the dumpling. I'm fairly certain there are tutorials out there on Youtube that will help. Hey- one day I plan on making my own.. watch this space. 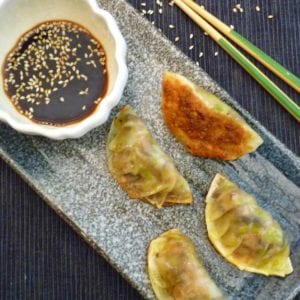 For the Dipping Sauce

I buy gyoza wrappers from the Japan Centre in London. But they are really easily to find in pretty much any Chinese or Japanese (Asian) grocery store. I buy them frozen & keep them in the freezer until about an hour before I want to use them.
Tried this recipe and loved it? Follow and Mention @vegan_larder or comment and ⭐ below