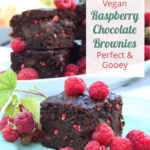 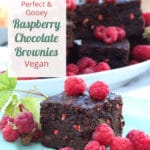 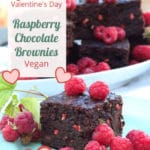 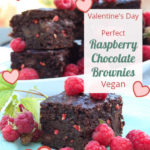 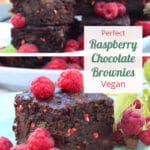 These Vegan Valentine's Brownies are great all year round. Not just for Valentine's Day! I've used these to win over colleagues, as well as birthday and dinner party guests. They have big chunks of vegan chocolate in. When you serve them warm the chocolate melts – perfect to pair with vegan ice-cream.

Yum!
This recipe was actually originally a recipe from my pre-vegan days, made with dairy & eggs. However, once I became vegan, it became my mission to veganise all my favourite recipes. This is one of my best-loved and most successful recipes!
Seriously- Everybody loves it! Usually, I make vegan brownies with chopped walnuts instead of fruit, but I wanted to do a special Valentine day treat with beautiful red features – a luxurious melt-in-the mouth gift for your loved one (or just you, of course!). However, if you don’t like the idea of fruit in your vegan brownies, stick in a handful of chopped nuts instead of the dried raspberries.

So what magic do I use to make these vegan brownies??

I learned that one of the keys to keeping these vegan brownies gooey is to use a load of milled linseed / flaxseed as the egg substitute.
This does have the effect of making the mixture look a bit strange. But I promise, just mix it all in well and it will work. Don't be scared by the quantities. I make a variation of this pretty much weekly and it turns out perfectly every time!! Just make sure you give it extra cooking time if you think it isn't done.

Any kind of sugar will do – standard caster sugar, or if you want a healthier vegan brownie use coconut palm sugar. Equally, with the oil, you can use what you have to hand e.g. rapseed oil, sunflower oil or melted coconut oil.

It's up to you how you decorate the brownies. Simple or more extravagant; both taste delicious. You could just do a simple cocoa dusting, and top with some fresh raspberries (frozen raspberries also work well if you can’t get hold of fresh). Or you can melt a load of chocolate with non-dairy milk and spread it all over the brownies as a vegan ganache (recipe below), then top with raspberries.

I hope you love these Vegan Valentine's Brownies as much as I do!

If you liked our Vegan Brownie recipe, please rate and comment - this really helps others discover and try our yummy food! 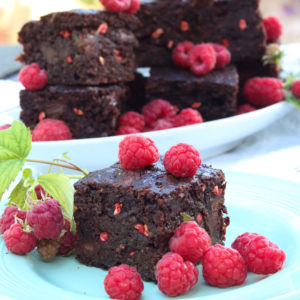