When I went into the kitchen to make this, I had originally decided to make a lasagna to use up a huge quantity of Bolognese 'mince'  sauce that I had cooked the previous night.

But then I realised that I didn't have any pasta sheets. And it was raining, which meant I didn't really want schlep down the hill just for one ingredient.

But I reaaaallly wanted a squishy comforting baked thing. The sort that is ridiculously delicious. But very difficult to make look pretty in a photo.

I'd also already soaked the cashews, ready to make my bechamel (ish) sauce, so was sort of half way committed to the process.

Then I remembered eating a comforting veggie based moussaka on a rainy Autumn day in Greece on a trip with my parents a few years ago & thought it could be easily veganised. All I needed to do was sub the pasta for thinly sliced potatoes and possibly aubergine.

My 'mince' sauce already has a whole diced aubergine in it, so I decided that actually using up some mushrooms that were hanging around in the fridge might actually be a nicer idea than more sliced aubergines, however to make the 'mince' a little more Greek flavoured, I then added in a pinch of cinnamon, which sounds a little unconventional, but really does work.

This isn't really the quickest dish to make. But it's worth it. Stick with me.

I'd suggest making a massive pot of the Bolognese 'mince' sauce the night before to eat with pasta, then using the rest as the basis for this recipe. You also need to remember to soak the cashews for at least 45 minutes. The potatoes need to be either pan-fried, or oven baked (my preference) and the mushrooms need frying off in some olive oil & herbs, ready to layer up in the moussaka.

The result of all your effort? Well, it may not be authentic, but it sure is delicious!

Make loads. It's even better the next day. 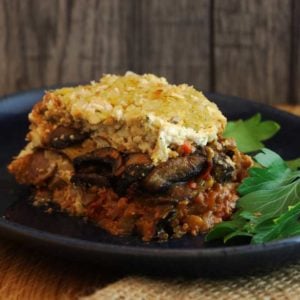 For the 'Mince' Sauce

For the 'Bechamel' cheezy sauce

For the potato layer

For the Mushroom layer

For the 'Bechamel' Sauce

To assemble the mousaka.