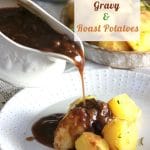 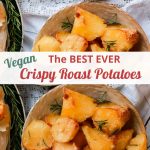 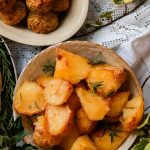 What's the best bit about any roast dinner is? Obviously, it's the vegan crispy roast potatoes! I mean, crunchy & crispy on the outside, fluffy in the middle roast potatoes, covered in a rich gravy, are pretty much the only thing that I consider a constant in any roast dinner. Luckily for you, I make the best Vegan Crispy Roast Potatoes in the world. (Go on. Challenge me, I DARE you!) I mean. Check out THESE bad bois.

These vegan roast potatoes have super simple ingredients. They are:

Potatoes - obviously! You need a good roasting potato variety. One that fluffs up and becomes a cloud of potatoey goodness when parboiled, then roasted. Maris Piper, Desiree or King Edward are all good varieties to use.

I get our spuds (that means potatoes in slang!) from Abel & Cole along with our weekly veg box, which means I don't know exactly what kinds I'll receive. However, the kind people there add a note in with the spuds to let us know what each type is good for, which is especially useful as sometimes they send some delicious varieties that are a little more unusual than you can find in the big supermarkets. But if I'm catering for a crowd, I stick to the tried and tested varieties for consistency.

Semolina - this is optional. Well, I say this in the sense that you can still make amazing vegan crispy roast potatoes without it. But if you can get it, that's ideal. Semolina is a coarse flour made from durum wheat that's perfect for that extra crispiness. It keeps for a long time and really isn't expensive. You'll get it online, in healthfood shops and in some supermarkets.

Olive oil - I always use olive oil to roast my potatoes as I think the flavour is superior. You could try other oils, but I 100% would never use coconut oil. It wouldn't taste right.

Salt and pepper - to taste. Salt is just essential on crispy roast potatoes.

The next thing you need to understand for these vegan roast potatoes is how to cut them for the best surface area to fluffy inside ratio. You want your spuds to all be roughly the same size, but maximise the crunch factor. Large potatoes can be cut into three. Small ones in half. Cut them at a diagonal for the best surface area ratio. (See the diagram and close up image below!)

This crispy vegan roast potato recipe is so super simple, that you'll be getting it out at all your roast dinners!

There are also some images below to show some of the steps. What you do is:

The other fail-safe tricks for these vegan roast potatoes are:

Here are some delicious ideas for what to serve with your vegan roast potatoes:

If you need more inspiration, check out these 35 Amazing Vegan Roast Dinner Recipes.

Louise xx (P.S. Follow me on Insta and Tik Tok too!)

If you're not ready to eat the potatoes once they're done, just put them in a low-temperature oven to stay warm. They'll just continue to crisp up