This delicious and decadent Vegan Chocolate Chestnut & Raspberry Trifle came about because we had some guests coming over & I wanted to level up and actually make a dessert. Usually the desserts we feature here are thought up by Vanessa, but this one is my creation!

I'm obsessed with using chestnuts in winter, there's something soothing about their slight sweet nutty flavour, whether baked into something savoury or made into a puree & served with dessert. They have a particular affinity with chocolate & vanilla flavours, so initially I was just going to make a simple velvety chestnut chocolate mousse & serve in little pots.

But then I remembered I had made brownies for a poorly friend.
And not just any brownies.

I had made too many to transport to my poorly friend so had popped the leftovers in the freezer, ready to get out when unexpected guest popped by. Or chocolate emergencies happened.

I'm SO unbelievably glad that I did have that 'what if' moment. Because a new dessert star is born and it is the perfect chocolatey trifley antidote to Christmas pudding. The first time I made this trifle, I used double the amount of chocolate that I specify in the recipe. This is totally gorgeous (and preferred by The Gardener) but I found it too intense, & it meant that the subtle flavour of chestnut was lost.

The layer of coconut cream on top also helps to balance out the overall flavour of the dish, so you get intense chocolate brownie, tangy raspberry coulis, creamy velvety chestnut mousse & cool coconut cream all in one bite. Delicious.

You can of course make this at any time of year, but I suggest making the Vegan Chocolate Chestnut & Raspberry Trifle as an alternative Christmas pudding & decorate with festive berries & pomegranate seeds. 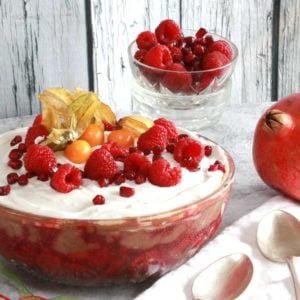 For the Brownie layer

For the Raspberry Layer

For the Chestnut Mousse Layer

For the Coconut Creme Layer

For the Raspberry Layer

For the Chestnut Mousse Layer

For the Coconut Cream layer

Keyword dessert, trifle, vegan
Tried this recipe and loved it? Follow and Mention @vegan_larder or comment and ⭐ below