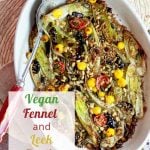 this recipe
Funnily enough, very early on when blogging I made a recipe super similar to this Vegan Fennel & Leek Gratin with Olives & Tomatoes, and I had completely forgotten about it until I googled Leek & Fennel gratin. And my own recipe appeared. And I thought WHAT? Is my memory so flaky that I've completely forgotten a recipe I came up with? However. I've decided that this recipe is just an improvement on my original Fennel & Leek Gratin.

And I do truly think it's an improvement. For a start, the photos are better. (take a peak here at the original! Hilars..)

The sweetness of the caramelised leeks & fennel is perfectly contrasted with the salt of the olives & the slightly acidic tang of the tomatoes. The nuts & seeds create a delicious crunchy contrast to the softness of the rest of the dish. And you know what? Not only is this dish yummy to eat. It's beautiful to look at! I think maybe it would be a delicious alternative side dish at Christmas or Thanksgiving. Or alongside a nut roast for Sunday. Alternatively if you don't want to wait for a special meal, maybe serve it alongside some mashed potato & braised or baked tofu. (Actually. You could smush some of the herbs & olive oil over some well drained tofu slices & add them in to the dish to cook and I think it would taste delish. Perfect for a speedier mid-week dinner! 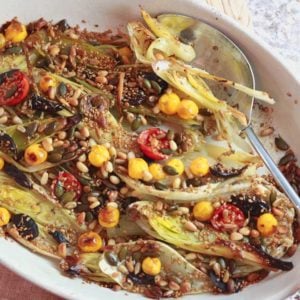