What could be nicer than a huge pan of potatoes, boiled then smashed, then pan-fried with sage until crispy! I present to you, my giant Vegan Smashed Potato & Sage Rösti. I'm writing this on semi-lockdown, staying away from people & crowds to do my bit as a good citizen to try and slow the spread of the horrible new Coronavirus. We're only 2 days into social distancing at the moment, so it's still not terrible and cabin fever hasn't set in, however, I'm starting to think what kind of foods will uplift and comfort, and truly, what is more comforting than potatoes! We're really lucky to have a garden to step out into & get outside, so although it's early Spring & not a lot is ready to harvest right now, I can still make use of fresh herbs, like sage or rosemary which bring a fresh herbal edge that both add flavour & serve to give a lift to the senses.

I have to confess, that this isn't really a traditional Rosti, but I wasn't quite sure what else to call it?  You see,  rather than grating the potatoes, I've boiled them in their skins (which are the best bit!).  I then smash them in a large pan & crisp them up in an unholy amount of olive oil, adding in sage, to make what is probably my favourite ever potato-based dish. (shh, don't tell the fries!) The key to this dish is the crisping. You want a delicious crunchy under crust to go with the soft fluffy potatoes. You'll need a wide and deep frying pan with a heavy base for the best outcome. Once you've boiled your potatoes, drain them & put them back in the pot over the heat for a second to steam them off. Add olive oil to your frying pan & put it on the hob to heat up. Then (carefully!) tip in the spuds & smash them into the pan in a single layer. Then add more olive oil over the top, season, add the sage & let to sizzle until the bottom is crispy and delicious. 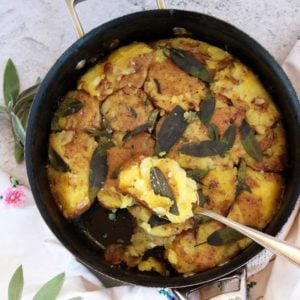 Love potatoes? Why not try our cheaty Patatas Bravas!

I love to cook and share gorgeous vegan food! I'm also a photographer, recipe developer and gardener. Find out more over on my About Me page.

Everyone's talking about these recipes..