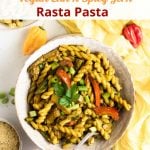 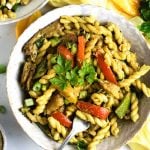 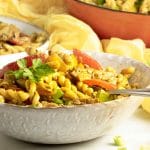 This Vegan Rasta Pasta recipe is just the best! You may be asking, "what is rasta pasta?" It's a delicious pasta dish with a creamy jerk-spiced Caribbean-inspired sauce. I'm going to take you through how to make it! Rasta Pasta is easily made vegan as most of the ingredients are naturally vegan anyway. Some non-vegan versions may have chicken, but we've used a vegan chicken, which is optional but super fun to add!

I love these flavours so much - my Mum is from the Caribbean and both my home town (Bristol) and where I lived for years in London (Brixton) have big Jamaican populations and delicious food!

🍝What is Rasta Pasta?

Rasta Pasta was invented by a chef called Lorraine Washington. It's a jerk flavoured Caribbean creamy coconut sauce with pasta. The sauce is 'Rasta' because it has jerk seasoning and other typical Caribbean flavours such as coconut and thyme. The trio of bell peppers (red, yellow and green) are the colours of the Rastafarian flag. Even the type of pasta that was originally used (tagliatelle) looks a bit like dreadlocks! Any pasta is fine to use though - we used gemelli pasta which is beautiful and twisted.

A vegan version of rasta pasta is not much different but uses vegan chicken, nutritional yeast instead of cheese, and won't use any dairy cream.

Here are the main ingredients to make the vegan rasta pasta:

This is how you make Vegan Rasta Pasta! It's basically about making a jerk-flavoured creamy coconut sauce that's mixed through delicious al dente pasta!

These are the most commonly asked questions about our vegan rasta pasta.

Why is it called Rasta Pasta?

It is a pasta dish flavoured with Caribbean ingredients, as well as having the colours of the Rastafarian flag reflected in the red, yellow and green bell peppers! Even the shape of the pasta such as tagliatelle, looks like dread locks - but any pasta shape is fine. Many recipes use penne, but we've used gemelli.

How do I store the Rasta Pasta?

It will keep in the fridge for a few days. It's great to add to a tupperware and take out for lunch! It freezes well too.

Can I make this without the vegan chicken?

Yes, we just added it as we wanted an alternative to the non-vegan options which had chicken in them. Either leave out or add some beans instead.

What can I use if I don't like coconut?

You could blend up some silken tofu and use that to make the sauce creamy instead. That would still be delicious!

Can this be made gluten-free?

Yes, just use gluten-free pasta. Also, make sure if you're using a vegan chicken that it's gluten-free.

This recipe was developed by Vanessa, one of the original co-founders of this site. Vanessa is now working on her plant based health coaching business, Energise and Thrive Plant Based. She helps people get high energy, great health, and balanced eating with delicious plant-based food.

She’s also brought out her FREE Guide - 5 Steps to Balanced Plant Based Eating which you’re welcome to download. Of course, all the recipes she has created for The Vegan Larder (like this one!) will remain here for you to access.

If you love this vegan rasta pasta then you'll love some of our other Caribbean-inspired recipes such as:

You may also love some of our best pasta recipes too, which are perfect for midweek meals!

Louise xx (P.S. Follow me on Insta and Tik Tok!) 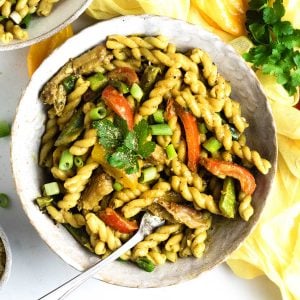 How To Make Vegan Rasta Pasta