I've tried and tried to grow aubergines, and this year have had some moderate success with a handful of the dinkiest aubergines I've ever seen!  Fortunately their flavour was pretty delicious, so next year I'll try even harder, growing them in larger tubs of soil in the greenhouse & feeding them more compost and organic feed over the summer!

I wanted to make the most of the aubergines cuteness, so I decided to make one of my all time favourite Japanese dishes that I learnt from one of my old Japanese flatmates. This is called Nasu Dengaku in Japan, and once I learnt how to make it I've made it again and again, and happily order it almost every time I find myself in a Japanese restaurant.

This is such a crowd pleaser too. Whenever I make it for friends gets gobbled up. And no wonder, the combination of soft and squishy baked or fried Aubergine  (Eggplant!) with a sticky sweet & salty umami miso glaze is a flavour bomb that is easy to devour.

In the photos here, I've served this over sushi rice to which I added a hint of sushi rice seasoning vinegar. However at times I've also made and served this for a drinks party with large aubergines cut into thick 1" / 2cm rounds then given the same treatment.

The trick is to these being something utterly delicious make sure the aubergines are reaaaaally well cooked.

They absorb loads of oil whilst cooking so to avoid them becoming too heavy, so I like to oven bake them rather than frying, slicking them with a mix of olive & sesame oils.  There's no reason to pre-salt then drain, as modern varieties of aubergines have pretty much had the bitter juices bred out of them.

To serve, sprinkle some sesame seeds and spring onions or maybe some nori sprinkles over. All delicious. 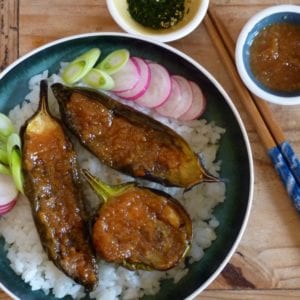