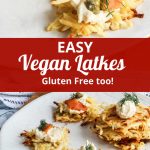 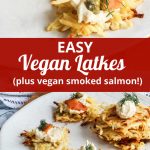 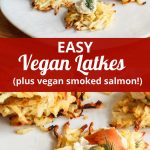 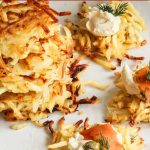 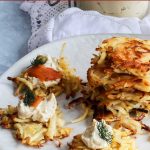 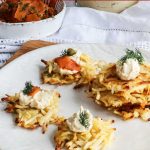 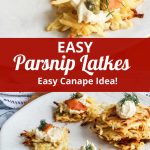 Everyone loves those little potato pancakes known as Latkes...am I right? Crispy on the outside and tender in the middle. Perfect for topping with cream cheese and lox (yep- we have vegan versions of those.) That's why these yummy and easy 4 ingredient vegan latkes made with potatoes & parsnips are going to be your new favourite too!

What makes these so great? It's all in the simple ingredients:

Potatoes: Potatoes are the backbone of a great latke. I use a floury variety for texture and flavour.

Parsnips: Parsnips add a subtle sweetness and earthyness to the latkes. You can leave them out and just use all potatoes if you like.

Chickpea Flour: We use chickpea flour (also known as gram flour or garbanzo flour) as the binding agent. It does double duty at replacing the traditional eggs and flour. Makeing these gluten free AND vegan! Yay! This is our favourite brand (affiliate link)

Olive Oil: A little bit of olive oil helps coat each little grated piece of potato or parsnip and helps cook them through & bind them together. We only use a drizzle, not a lot. But for some reason it creates the best result, time after time.

Seasonings: In this recipe we use a little salt to taste. You could also add herbs, onion or even a hint of smoked paprika, but we like them as is, ready for toppings! 👩‍🍳

❓FAQ for the Vegan Parsnip Latkes

What kind of potatoes are best to use?

We like floury potatoes such as Desiree, King Edward or Maris Piper.

Do I have to use a combination of potatoes and parsnips in this recipe?

You can definitely just use either if you want to. Potatoes will need to be squeezed out more if you just use those.

Why do you squeeze all the moisture out?

It makes for a less soggy and more crispy and delicious latke.

Why firm the latkes down well before baking or frying?

This helps the chickpea flour work to bind them together! You can squish them with a spatula or use 2 tablespoons to do this.

Can you fry the latkes?

We have tested them both baked and pan fried. Both work equally well! Baking makes them a little healthier and is a little less messy (for us)

Can you make these in the airfryer?

Yes you can! You might want to experiment to see how long they take for your particular machine.

🥞Serving Ideas for the Latkes

They also taste great with dips and hummus as a delicious canape idea: Simply pile some dip on top of the latke and top with herbs!

If you make these latkes, and love them as much as we do, please leave us some stars and comment below! (oh - and share with all your friends too!!) 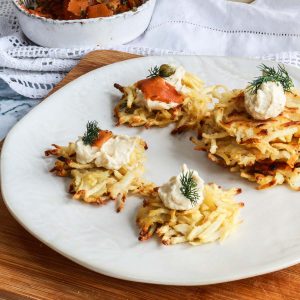 These latkes keep well in the fridge for up to a week.  Make them ahead of time for a party and reheat them, ready to top with goodies!